Soil Invertebrates are an important part of the ecosystem in which they reside.  They are often overlooked because of the fact that they are so small and cannot be seen with the naked eye.  The following study looks at the species richness of soil invertebrates while comparing two different parks that were in completely different areas.  The parks that were compared are Pioneer Park in Kenton County, Kentucky and the second growth of Withrow Nature Preserve in Cincinnati, Ohio.  The hypothesis that we were testing was that the more disturbed, industrialized Pioneer Park would have a lower species richness compared to the less disturbed, more rural Withrow Nature Preserve.  The method for testing this was taking two different samples of leaf litter from within each park that measured 10cm by 10cm for a total of 40cm2.  These samples were then put in a Berlese funnel for a full 24hrs and collected in a dish of alcohol.  After going over the samples from each park, we found that the impact of an industrialized area had no effect on the species richness of the environment.  Further data collection would be needed to corroborate whether this would also be true over a larger area.

The question this study is aiming to answer is what effects a frequently disturbed industrial area has on nearby ecosystems by looking at the soil invertebrate communities’ species richness. In order to determine the health of the area in question samples should be collected at both the site in question and a control site, then the two communities can be compared. The hypothesis states that a frequently disturbed industrial area will have a low species richness compared to a less disturbed area without industrial influence.

The first site we tested was Pioneer Park located in Kenton County, Kentucky. The park is located along a major highway near several factories and residents. The park has little forested area which is primarily new growth and is a heavily used recreational park that includes sporting fields, a dog park and picnicking areas. Banklick Creek runs through the park and is downstream of residential areas, the park is frequently flooded after heavy rainfalls.

The second site we tested was Withrow Nature Preserve located in a rural area west of Cincinnati, Ohio. The preserve has a history of farming and is heavily forested including old growth as well as new growth and is primarily used for its hiking trails. The preserve is much less disturbed than Pioneer Park, the preserve also lacks nearby industrial influence as well as a lack of a nearby creek.

The sampling technique used was very simple and rudimentary, requiring nothing more than a few meter sticks and grocery bags.  The samples that were collected were in two 10 cm2 sections for a total of 40 cm2 at each site. At each site the sections collected were in new growth forest one near the edge of the forest and the other deeper in the forest. The sample from Pioneer Park included species such as sycamore, oak and maple leafs among others and Withrow Nature Preserve sample consisted of primarily oak and maple leafs. Both sample sizes were similar as well as presence of woody material. The leaf litter within the measured sections ware picked up and placed in a plastic bag to be brought back to the lab and placed in a Berlese funnel for 24 hours where a light in the top of the funnel would drive the organisms within the leaf litter out the bottom of the funnel into a jar containing 70% ethanol. The organisms were then separated into general species and counted the results of which were then analyzed for species richness.

The results of the study were unexpected compared to what we were looking for.  As seen in Table One in Appendix A, Pioneer Park had a density of 44 organisms.  These organisms were largely dominated by one species of springtail accounting for almost 50% of the total organisms collected.  Withrow Nature Preserve had a few more organisms but overall, the density was close to that of Pioneer with 53 total organisms as depicted in Table Two also in Appendix A.  This sample was dominated sheer number wise by mites, which accounted for 30% of the total, but species diversity wise, was dominated by springtails; there were three different species within this sample alone.  In Appendix A, there are rank abundance graphs for each park, which show the sheer numbers for each organism we found within the study at each site.  Our calculated Shannon-Weiner Diversity Index for Pioneer Park was 4.526 and 4.527 for Withrow Nature Preserve.  Overall, each site was pretty similar when it came to species richness and diversity of organisms within the samples.

The results of our study in a way threw us for a loop because they were so unexpected from what we thought they were going to turn out to be.  When looking at the figures and tables that we put together, there was a very small density difference between Pioneer Park and Withrow Nature Preserve.  Pioneer Park had an overall density of 44 organisms and Withrow Nature Preserve had an overall density of 53 organisms.  Apart from a few minor differences in how the organisms looked, the samples had very similar species comparisons as well which was interesting.  One reason we were so confident about our hypothesis was because we were looking not only at two different parks in different areas but also in two different states.  However, it appears as if the location, at least for our small study, had little to no effect on the density of species richness when it came to the different sites.

The biggest result that came out of our study was the Shannon-Weiner Diversity Index that we calculated for each site.  The calculated index for Pioneer Park was 4.526 which one the scale is an indication of a very diverse and rich area.  For Withrow Nature Preserve, the index that was calculated was 4.527, which again is a very diverse and rich area.  However, what is interesting here is how close these numbers are.  The fact the indices are .001 away from each other disproves our entire hypothesis that there would be an impact based on the industrialized location of Pioneer Park compared to Withrow Nature Preserve.  As indicated by the indices, both locations are very diverse and species rich which is a positive aspect that came out of our study.

Our study had obvious limitations that would need to be corrected to further our study.  One limitation of our study was the size of the plots we collected from and the number we collected.  We only collected 40cm2 at each location and only acquired two samples for each as well.  For locations that are as big as Pioneer Park and Withrow Nature Preserve, we would need to not only widen the area we collected from but also collect a vast more number of samples.  Another limitation that was present was the fact that we only collected from two different parks that were local.  If we were to add more parks in different areas, we would be able to further test our hypothesis on these parks in comparison to what we found now.  The addressing of these limitations would help to further our study and possibly make our hypothesis more valid.

We would like to thank one another for the help that was given in this study.  Each of us brought a different overall creative idea to make the study unique and successful.  Also, we would like to thank Dr. Shannon Galbraith-Kent, professor of biology at Thomas More College, for her help with the study.  Dr. Galbraith-Kent helped to guide us in directions that would make our study even more unique and was available to offer further guidance and/or help when asked.  Furthermore, Dr. Galbraith-Kent was available to assist us with getting the Berlese funnel set up and running to get our samples up and cooking. 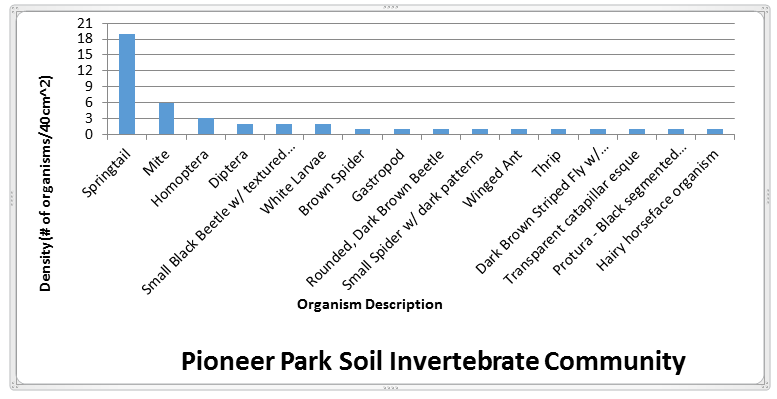