Molecules can be described by vibrational and rotational states.  These rotational states also exhibit quantum numbers, which are integers represented by the variable J.  The simplest model of a rotating molecule is the rigid rotor.  This method of describing a rotating molecule consists of two particles connected by a rigid bond.  One condition of the rigid rotor is that the wave function must be identical when it rotated one full revolution.  The vibrational states also exhibit a quantized characteristic.  The vibrational quantum number is represented as v.

Vibrational spectroscopy only works if the molecule being observed has dipole moments.  In other words, the electron distribution about the bond in the molecule must not be uniform.  This therefore excludes molecules such as H2, N2 and O2 [2].

The spectrum of HCl shows two separate peaks, one for the each of the two isomers of chlorine.  There are two branches in the spectrum observed in this lab report:  the R branch, which corresponds to ∆J= +1, and the P branch, which corresponds to ∆J= -1. Each set of peaks in the branches are defined by m values, of which the R branch values are negative and the P branch values are positive.

First, the chamber in the Nicolet 6700 was purged with N2 gas.  Next, one drop of HCl was put into the gas cell.  The sample of the HCl was then collected in the gas phase.   IGOR was used to analyze the data and to create the plots. 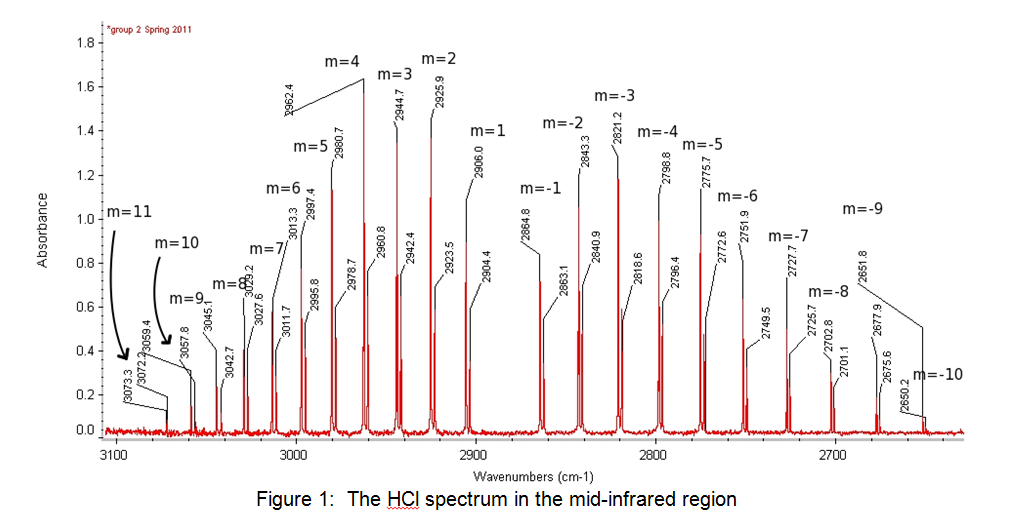 Table 1:  Results from the spectroscopy

The raw data from Table 1 was plotted using the Igor software.  The results are shown in Figure 2 and Figure 3: 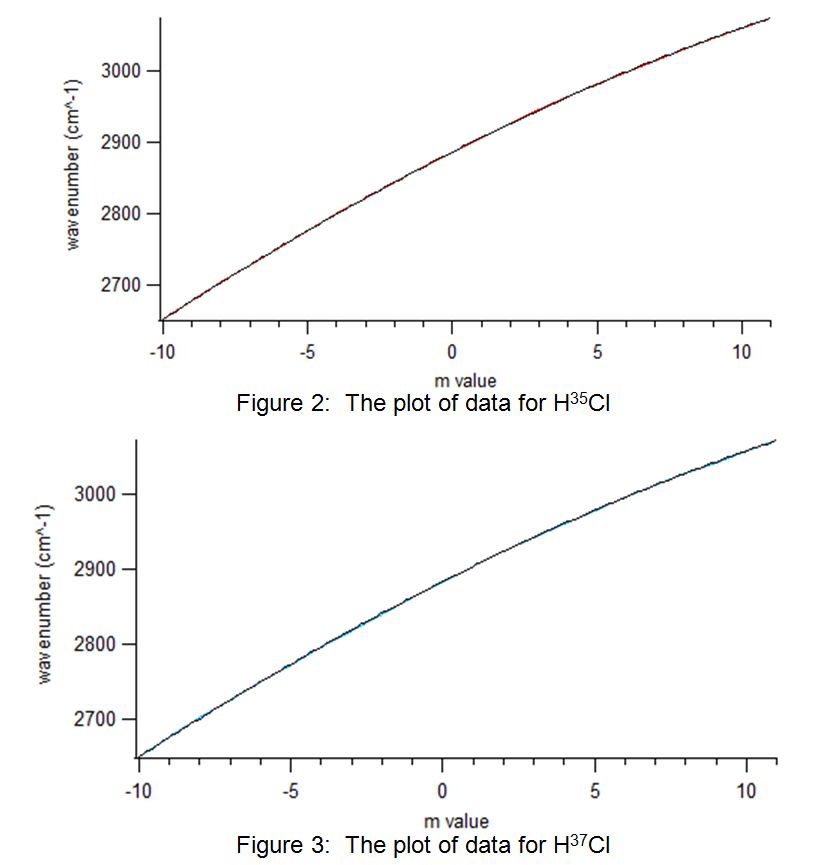 The plots above in Figure 2 and Figure 3 display a polynomial shape of the form:

Where a=v0, b=-2(αe–Be ), c=-αe and d=-4De.  From this equation, and using the values provided by the analytical software, these constants could be solved for.  The values are solved for below in Table 3

Table 3:  Values for the four constants in question.

Literature values for the constants above are shown in Table 4 below:

Table 4:  Literature values for the four constants in question.

The experimental values were compared against literature values, the percent errors are shown below in Table 5:

Table 5:  Percent Errors for the constants.

As most of the data in this experiment was processed using computer software, the most likely source of error is from random human error.  For example, improper preparation of the sample to be used in the experiment or misuse of the Nicolet 6700 could be potential causes of error.