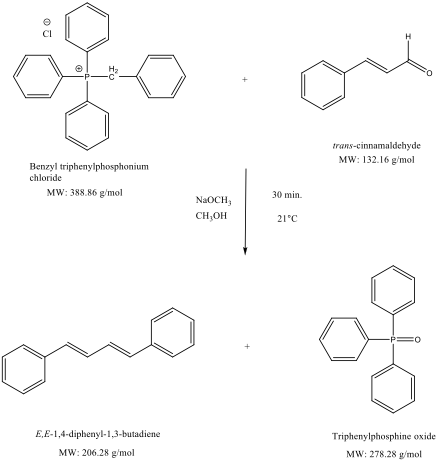 Benzyl triphenylphosphonium chloride and cinnamaldehyde were reacted with sodium methoxide to obtain E,E-1,4-diphenyl-1,3-butadiene as a white, crystalline solid in 22% yield. The melting point of the crystal product was determined to be 150-151˚C, which was within the literature range, thus supporting the identity of the compound. Resulting in such a small range suggests that the final product was safe from contaminations of unreacted starting materials, solvents, or by-products. The yield was low and could be improved with the following considerations in mind: when the ylide is formed, its zwitterionic form can become very unstable and reactive with other molecules than the chosen carbonyl compound. This ability to stabilize as a zwitterion can also lead to other polar reactions with contaminants in the reaction vessel. Not only the ylide can perform such reactions but cinnamaldehyde is an α,β-unsaturated ketone and thus has the potential to form an enolate, reacting with sodium methoxide, instead of elimination taking place on the triphenylphosphonium chloride group. According to analysis by Adlercreutz and Magnusson, “competitive enolate formation is the main reason for the low yields of olefin sometimes encountered in Wittig reactions between ketones and methylenetriphenyl-phosphorane.” Enolates can be saved by adding water to the mixture post-ketone addition, quenching the enolates to produce more reactant for the ylide to come in contact with. Through several cycles of extraction, drying, olefination and quenching, the product alkene yield will increase while the enolate concentration will diminish to almost none being reacted.1 Thus, according to Le Chatelier’s principle; the reaction will be pushed to the right as reactants and water are added.

(1) Adlercreutz, P.; Magnusson, G. Synthetic and Mechanistic Aspects on the Wittig Reaction. A