It was hypothesized that the reaction substrates and conditions would be a viable option for industrial and large scale synthesis of the target coumarin product.  Ethyl phenylpropiolate was synthesized from phenylacetylene and ethylchloroformate.  It was then combined with sesamol, in the presence of palladium acetate as a catalyst, to synthesize 6,7-mehtylenedioxy-4-phenylcoumarin.

Coumarins are naturally occurring molecules that are found in plants that have numerous uses in the medical field because of its biological activity.  The wide varieties of its uses include antibiotics, anticoagulants, and sometimes even used in the perfume industry.  Unfortunately, they can be difficult and expensive to isolate.  In the chemical and industrial setting, it is more practical to synthesize them, instead of extraction.  This specific reaction will result in a ring closure and addition of the ethyl phenylpropiolate aided by the palladium acetate catalyst.  The palladium catalyst allows for the addition of an ester to a phenol resulting in a ring closure and product coumarin derivative.[1]  The palladium catalyzed reaction of alkoxyphenols and alkynoates in the presence of TFA has been found to be a convenient method for the formation of coumarin derivatives.[2]  It is believed that the reaction, proposed in scheme 1, will be a more cost effect way of producing the product coumarin derivative than extraction from natural sources.

To be cost effective, the reaction must be able to produce a 70% product yield.  Slightly reducing the cost of the reaction, the starting material, phenylacetylene, is reacted with n-BuLi to form the starting reactant ethyl phenylpropiolate from scheme 1.  This reaction step is shown in scheme 2.

The experiment called for the use of 5mol% palladium acetate catalyst, but only 3mol% was used here to conserve materials and decrease cost.  A 5% NaOH base wash was required to clean up the coumarin product and remove excess sesamol.  Loss of product may have occurred during this stage of the reaction process due to mishandling or excess rinsing.  The conversion of phenylacetylene to ethyl phenylpropiolate was made apparent by the comparison of IR spectras.  The phenylacetylene reference IR spectra found on the Spectral Database of Organic Compounds shows a strong peak at about 3300 that the IR of the intermediate lacks.  Also the intermediate’s IR contains strong peaks at 3000 and 2230 which are both absent from the starting material’s IR spectrum.  Both of these changes indicate a successful conversion of phenylacetylene to the intermediate ethyl phenylpropiolate.  Scheme 3 demonstrates a possible reaction mechanism for this product. 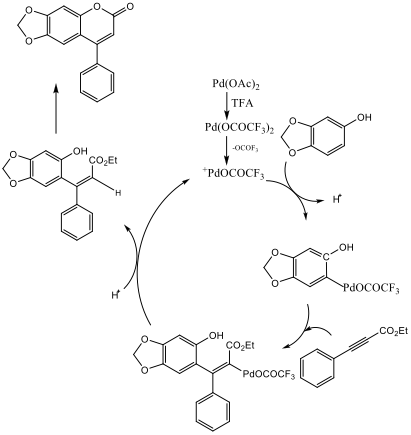 The insertion of the ethyl phenylpropiolate to the sesamol-palladium intermediate is initially achieved in a cis confirmation.  There is then an internal rearrangement of the palladium and CO2Et ligands to the trans confirmation which then allows for an electrophilic aromatic substitution to close the ring.

Although the product was relatively pure, the yield was just under the necessary level to be deemed financially practical in the industrial field.  Product may have been lost during the base wash that was necessary to remove excess sesamol and therefore this may actually be a viable reaction process for mass production.  More research will need to be done to increase the yield of the product coumarin derivative before determining whether it would be a cost effective method of production in an industrial setting.