Recrystallization and Identification of Unknown

Recrystallization and Identification of Unknown

Melting range of possible compounds as reported by 2Nile chemicals. 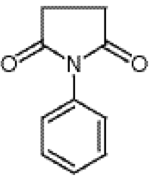 The figure shows the structure of N-Phenylsuccinimide.

The first objective was to determine an appropriate solvent for the impure mixture. This was done using the method described by 3Zubrick. The solvent that worked best for the N-Phenylsuccinimide was ethanol. When added with water, nothing dissolved at all, which is good, but upon heating everything remained solid indicating that water was not an appropriate solvent. The acetone dissolved everything before being heated, which meant that it would not work as a solvent because crystals could not be formed. The toluene partially dissolved the compound at room temperature, and upon heating more dissolved, but there was still a fair amount of what appeared to be the compound that remained at the bottom of the test tube when the heating was done. When it was cooled to recrystallize the compound formed more of a murky solution that it did compact crystals. When ethanol was added originally it appeared as if a small amount of the compound dissolved. When heated up everything but the contaminants remained. Upon cooling there were a lot of crystals that formed and they were all compact at the bottom. This shows that ethanol was the appropriate solvent.

N-Phenylsuccinimide has the configuration of Figure 1, as shown by 2Nile Chemicals. The compound is an organic structure with two ketones around the ring containing four carbons and a nitrogen. The ketone and nitrogen groups would be expected to give the molecule a partial polarity with the negative side going away from the attached benzene ring. Because the general rule in chemistry is “like dissolves like” it makes sense that ethanol is an appropriate solvent. Ethanol is an organic compound that will also be polar because the hydroxide group attached to the ethane backbone is more electronegative than the ethane structure.

The same thing that occurred in the small scale reaction occurred in the large scale test. The two grams of compound “E” was dissolved in 25 mL of hot ethanol. Twenty-Five milliliters was chosen as an amount because it was enough to cover the compound but not much more. When it was filtered hot ethanol was added to the filterpaper and funnel so that crystals would not form as the hot mixture went down the room temperature filterpaper. When the filtration was complete the mixture at the bottom was clear and the filter paper had a lot of contaminants from what appeared to be mini rocks to sawdust to dirt. Crystals formed at the bottom of the flask when it was placed in ice water without any help from seeding or scratching the side of the flask.

The compound was then vacuum filtered to collect the crystals that had formed. The vacuum was set up and the flask was poured directly into the filterpaper. It took about ten minutes before the ethanol stopped dripping through to the bottom. Then the filterpaper was removed and let dry. Upon drying the compound all had the same consistency, it was very fluffy with an offwhite color and the compound formed in little plexiglass looking needles. When the known N-Phenylsuccinimide was collected for the melting point determination, it had the same consistency, which was a good sign that compound “E” was N-Phenylsuccinimide. The mass retrieved was only 0.682g of the original 2.000 g. The contaminants removed from the compound were not weighed, but because of how low the density of the N-Phenylsuccinimide and how much the contaminants weighed, this seemed like a fair amount to recover. Any contaminant that was dissolved in the ethanol would remain dissolved upon cooling, so some mass may have went there. It is possible that mass was lost in transferring the compound from the flask to the other flask when it was filtered.

The unknown organic compound “E” was identified to be N-Phenylsuccinimide. Compound “E” was identified by purifying it through recrystallization with hot ethanol as a solvent and determining it’s melting point. It had a melting range of 154.3-155.5 degrees Celsius. When mixed with known N-Phenylsuccinimide, the melting range was determined to be 154.3-155.3 degrees Celsius. The purification techniques performed gave a 34.1% recovery.

The first procedure was to determine the appropriate solvent for compound “E.” To do this approximately 50 milligrams of the compound was added to four different test tubes. To each of the four test tubes a different solvent was added. Water to the first one, acetone to another, ethanol to another, and finally toluene to the last. The test tubes were then observed for solubility. The ideal solvent wouldn’t dissolve the compound at room temperature, but would upon heating. So each test tube was then placed over a steam bath and brought to a boil. This happened for the water, ethanol, toluene and acetone. The compound was observed and the results recorded. Then the solvents containing the compounds where “E” dissolved upon heating, toluene and ethanol, were placed in an ice bath for ten minutes and observed for crystal formation. The solvent that produced crystals upon cooling was the appropriate solvent, for “E” it was ethanol.

The next goal was to actually purify the compound. To do this 2.000 grams of compound “E” was weighed out and added to a flask. Twenty five milliliters of ethanol at room temperature was added to the flask, and an extra 25 mL was collected in a beaker. Both the flask and the beaker was brought to a boil over the steam bath allowing for the organic compound in the ethanol to dissolve. Once it was dissolved, it was filtered to remove the impurities. Using gravimetric filtration and fluted filter paper that was heated by pouring the extra 25 mL of hot ethanol across it the contents of the flask were filtered. The remaining ethanol and dissolved compound E was placed in an ice bath for ten minutes to allow for the crystals to reform. Then to remove the liquid ethanol from the solid organic compound, vacuum filtration was used. The filter paper containing the solid was allowed to sit in a drawer for a week to dry completely.